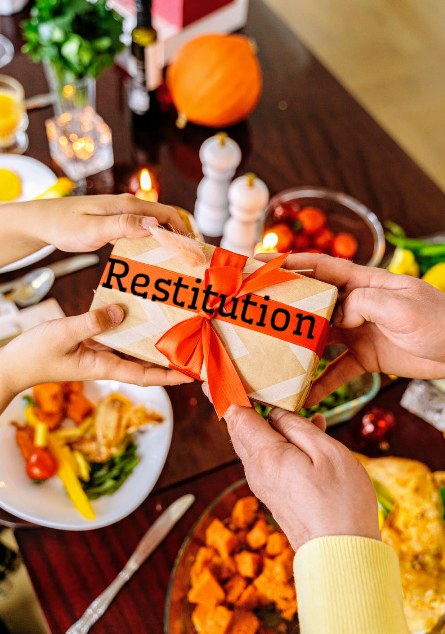 Restitution is not a term that’s often heard among Christians, instead, other familiar and less serious words/phrases such as: refund, compensation, making amends, etc are some of the words you would hear on the regular. However, restitution is a biblical principle that every believer should take seriously. That’s, if you’ve truly had an encounter with Jesus. Everything changes the moment Jesus comes into your heart. And that includes undoing the wrongs you did when you were unsaved. Now, this brings us to the meaning of restitution.

Restitution means the restoration of stolen or misappropriated things, property, or persons, to their rightful owner. It also include paying one’s debt, uncovering crimes committed, returning items one defrauded people of, confessing lies told, making confessions where necessary, and apologising to those wronged.

The principle of restitution is deeply rooted in the scripture even as far back as the old testament. Exodus 22:1 “Whoever steals an ox or a sheep and slaughters it or sells it must pay back five head of cattle for the ox and four sheep for the sheep.” If we look further in the book of Numbers 5:7, it says, “and must confess the sin they have committed. They must make full restitution for the wrong they have done, add a fifth of the value to it and give it all to the person they have wronged.”

Consequently, anyone who has received the precious gift of salvation will see the need to make restitution. The conscience of the believer is made alive by the operation of the Holy Spirit. It’s the him who urges us to make right our wrongs More so, a true believer can’t silence the conscience because no part of the dark hidden things from our past can stay hidden from the light of the Gospel of Christ. Whatever deadens our conscience, and makes it insensitive to the voice of the Holy Spirit is certainly not of God. The bottom line is, restitution is a necessity for every believer whose desire it is to make heaven.

Unfortunately, some Christians even years after they came to Jesus still don’t make restitution. Many erroneously believe that grace covers it all, but that’s not what the Bible says. In Ezekiel 33:14-16, the scripture says “And if I say to a wicked person, ‘You will surely die,’ but they then turn away from their sin and do what is just and right – if they give back what they took in pledge for a loan, return what they have stolen, follow the decrees that give life, and do no evil—that person will surely live; they will not die. None of the sins that person has committed will be remembered against them. They have done what is just and right; they will surely live.” There, you have it! Restitution is unarguably a crucial step every Christian should take.

Lastly, I would like us to draw a lesson from Zacchaeus. He’s the perfect example of what a practical step toward restitution should be. Luke 19:8, ”But Zacchaeus stood up and said to the Lord, “Look, Lord! Here and now I give half of my possessions to the poor, and if I have cheated anybody out of anything, I will pay back four times the amount.” His encounter with Jesus filled him with so much joy, that he was willing to give half of his possessions to the poor. But most importantly, he promised to restore four-fold to those he had cheated. This decision came as a result of the change that occurred the moment he met Jesus. Hence, the need to make restitution is something the Holy Spirit would naturally put into your heart.

Nevertheless, if you silence and ignore the voice of the Holy Spirit who urges you to do the needful; he would rather leave than strive with you because he is a meek personality. This would lead to a defiled conscience, make a shipwreck of your faith and eventually stand as a stumbling block to your entering heaven.

It’s my earnest desire that we stay open and yielding to the Holy Spirit always!